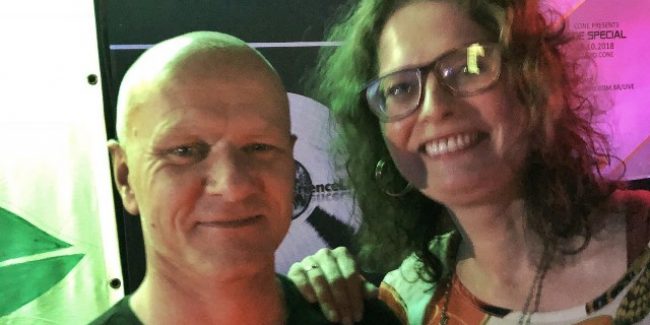 Pat Baker has been professionally around for many years but Dancefair 2016 is where we met. Of course he told me the story of his first gig. "A huge stage on Liberation Day."

Pat Baker and I have a little inside joke in which I always say that I ‘discovered’ him at the Dancefair in Utrecht. Complete nonsense of course, since Pat has been professionally around for many years. Dancefair 2016 is where we met though, because he attracted me by his uplifting happy techhouse sound. Since then, we’ve met many times and of course he told me the story of his first gig. “Suddenly, I noticed some butterflies in my s

“I first became aware of the phenomenon of mixing when I was ten years old. I’m talking disco music, because this was in 1980. Through an uncle who had seen Saturday Night Fever once too much, I started practicing with on two SL1200’s by using Brick House by the Commodores and Lakeside’s Fantastic Voyage.”

“My practicing existed mostly of using the convenient slide on the right side of the turntable, hehe. Not much later, I found out that the it was known as the pitch fader. After hours of practicing, two glasses of lemonade and an obligatory meal, accordingly to my parents I could talk about one thing: that one moment when I succeeded in syncing those two completely different tracks. It became a long night…” (laughs) 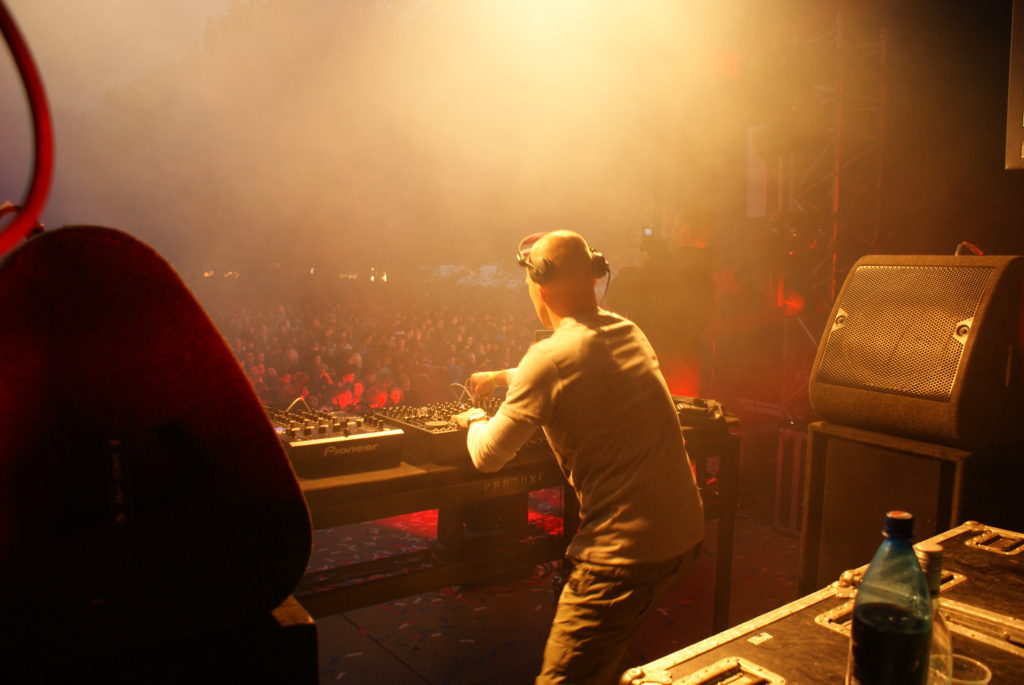 “Every DJ will recognize this: that moment the mix-virus gets a hold of you and won’t leave you alone anymore! I started with a weekly spot at the (children’s) disco-afternoon in the club house. The playing went utterly effortless. Also because, in those days, being a DJ was quite unique. Besides that, I knew the public very well.”

“Soon after, I wanted to mix more often than that one afternoon per week. Due to the great geographic distance from the previously mentioned uncle, it became clear that I needed my own gear. At that point, I lived in Den Helder, which is a town that is surrounded by flower bulb farmers. So, after working for a while and some sponsoring, I was the proud owner of my own set of SL1200’s.” 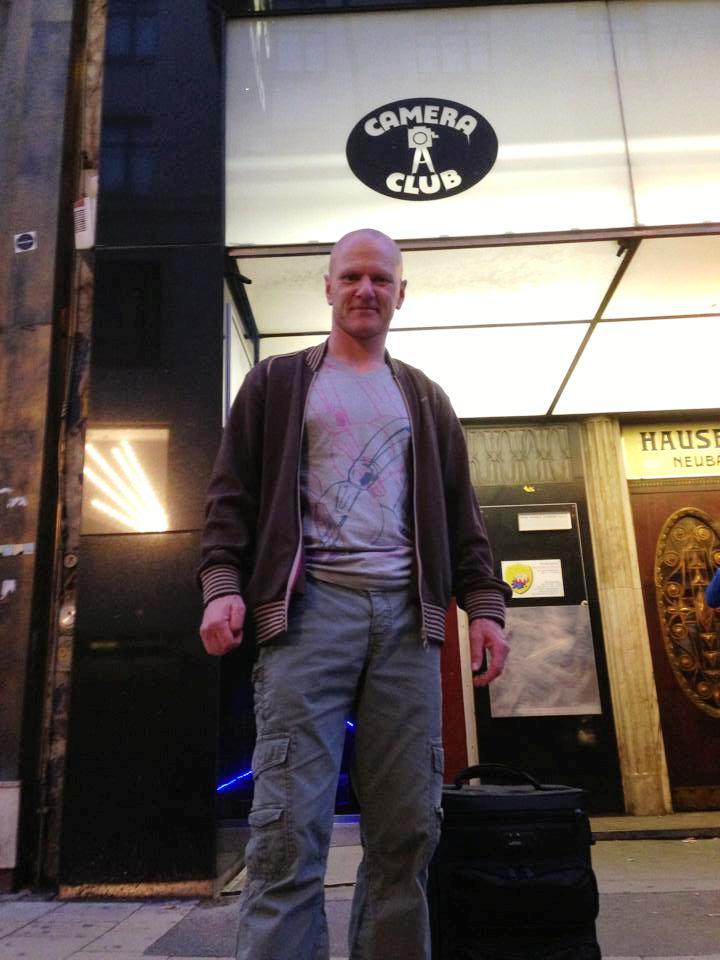 “This opened doors to many local parties and finally I was asked to play beyond the borders of my town. This felt completely different. I didn’t know the people (read: the vibe), which made it a lot more exciting to play over there. Fortunately, I have always been well received, which only increased the motivation to keep playing.”

The track that changed everything

“In the period between 1983 and 1998 a lot of developments took place in the area of dance-related music. First the funky grooves of – among others – Earth, Wind & Fire, Shannon and D-Train and then suddenly, out of nowhere that one house track came to Europe. The track that for me symbolizes the shift from a relatively low BPM towards the somewhat more uptempo house sound, that one house that changed everything, was Love Can’t Turn Around by Chicago producer Jesse Saunders, who was unknown to me at that point. Once I heard this sound, I was hooked and felt obliged to visit the big city to buy more records of this type.” 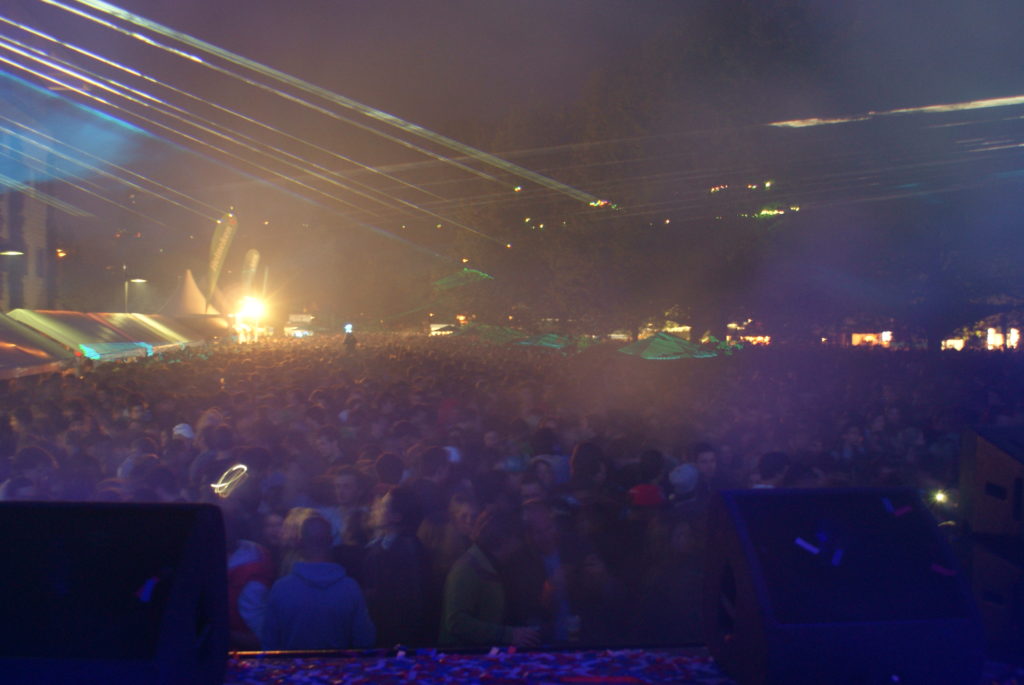 “When I went to Amsterdam to buy these records, I noticed flyers here and there of the to me also unknown club RoXY. People told me about the club nights and not soon after that, a visit to club RoXY became a fact. What a revelation! Those who’ve had the RoXY-experience know exactly what I’m talking about. The energy and the accompanying house provided me with an enormous drive to continue to do what I had been doing for years: entertain people with music that I had chosen.”

“Because internet didn’t exist yet and the media weren’t very interested in party reports, television network VPRO filled in that gap with a program named Onrust (Turmoil). In that show they regularly reported about the underground scenes in Amsterdam and Rotterdam. I was fascinated by the stories and images of DJs Eddie De Clercq and Joost van Bellen.”

“In the years following my discovery of house music, the technique changed as well. From the first CD players for DJs to a small MIDI-set in the micro-studio: I had to have them! In the course of time, through my job I was able to visit many big cities abroad. This way I could keep pace with various music movements. Singapore, for example, was a city that was a little behind to Europe when it came to sound, whereas New York was extremely progressive.”

“The Dutch and the British made a lot of experimental music in those days, that was great. They truly were pioneers in the area of dance music. My own musical roots lie in disco and funk. Therefore, I am always searching for records with that, to me very important, groove. Carl Cox is truly my example! His sets tend to techno and tech house / house where the groove is paramount.” 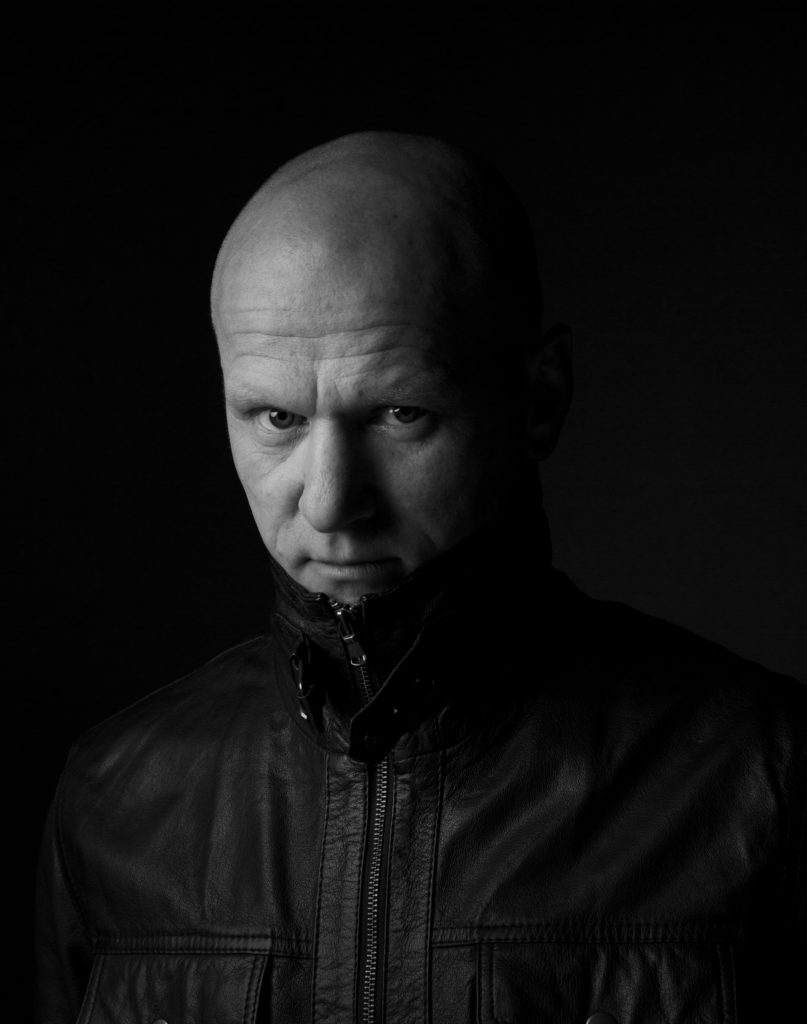 “In February 2012 I received a phone-call from the organizer of the big Dancesquare stage on Liberation Day in Wageningen. He called me because I had done a gig for him in 2011. I’ll never forget that phone-call. I was driving home from work, when I heard the words ‘huge stage at the celebration of May 5th’. I immediately parked my car, so I could concentrate on the conversation. The assignment sounded simple: I was to play a ninety-minute set. Later I found out that my set was planned on one of the largest stages nationwide that day, with an estimated crowd that would exceed ten thousand people. Suddenly, I noticed some butterflies in my stomach.”

“Liberation Day started with lots of rain. Nor was the temperature something to be happy about. That sucked! Fortunately, the weather cleared up during the day and my set wasn’t planned until later that night. It was only a short drive from my parent’s house to Wageningen. When I arrived, I was pretty impressed with what I saw and especially with what I felt. At least ten huge subwoofers were placed underneath the stage. You could actually feel the floor move. This was very promising.” 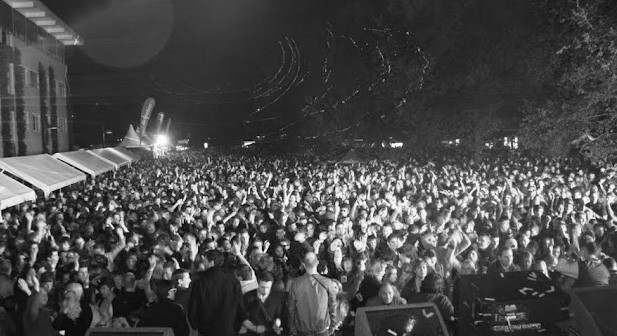 “What an atmosphere! Plenty of people were dancing, with or without umbrella. I was as ready as I could be! Of course, there had been some careful deliberation about the course of the line-up, that went from deep house and groovy tunes towards closing act Marco V with his uplifting progressive sound. My spot was between Lucien Foort and Marco V. This implied a whole lot of techno.”

“My turn wasn’t until 9 PM. Before that, I checked out the crowd from the DJ booth. There was room for fifteen thousand people and around 6PM the place was over half-full. Due to the rising tension I couldn’t eat a bite. Around 8.30 PM I started moving. Out of sight from the public, the DJ booth had a second arrangement of gear. This way I could prepare myself. After three toilet-visits and a good laugh with MC Pryme the clock finally showed 8.55 PM. DJ-gear on – check! Music – check! Bottle of water – check! Another toilet-visit?” (laughs)

“My set-time was the best of the day, with a blue sky that slowly faded into night, a laser-show and an estimated crowd of fourteen thousand people, that varied in age from sixteen to fifty. The huge difference in ages made it hard to know how people would respond to a heavy sound. I took the plunge and went for it! Fortunately, as far as I could see, everyone was having a good time. Hoping to connect with the audience I took a risk by mixing in a track that almost everybody knew: Seven Nation Army by The White Stripes. I started the well-known bassline and slowly mixed it into a Carl Cox track. Then I waited for the response. In no time everyone was singing along and all Germans were ‘h@mo’.” 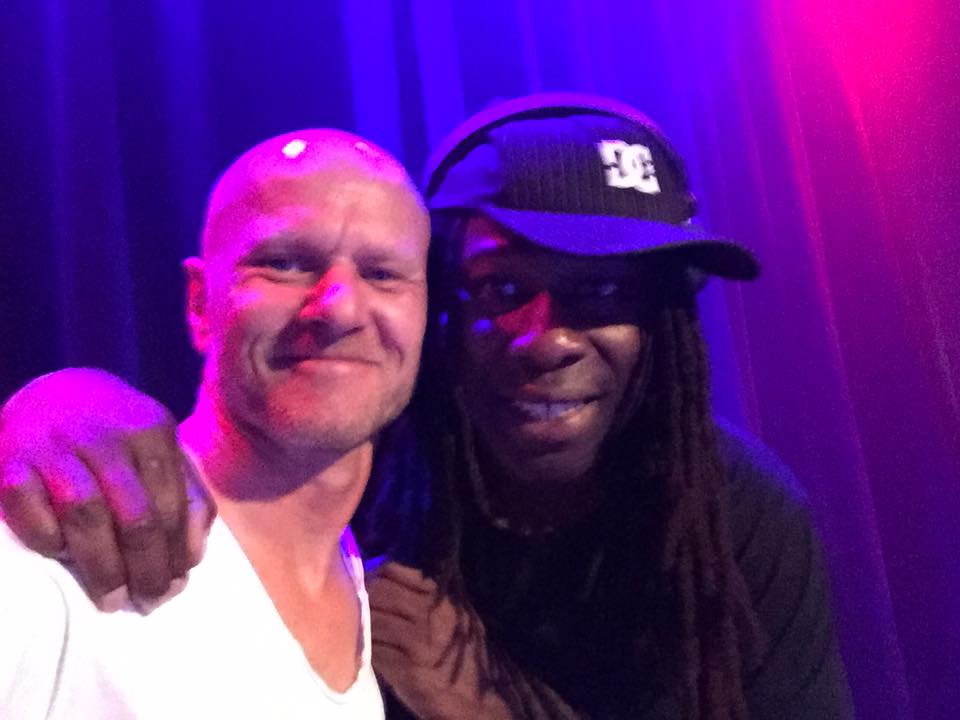 Before I realized, Marco V was already walking behind me to prepare himself. After a nice announcement and an enthusiastic crowd, the ninety minutes had finished. Whenever I see the videos on YouTube I still feel utter joy thinking back at that set.”

“After I played in Wageningen, the bookings increased. I had some gigs abroad, but also at festivals like Magneet Festival, Dance Festival Breda and the Sundaypeople Festival. I shared line-ups with Lucien Foort, Roog, Michel de Hey, Dave the Drummer and Bart Skills.”

This article is originally on Thursday March 24th 2016 published on DJMag.nl. 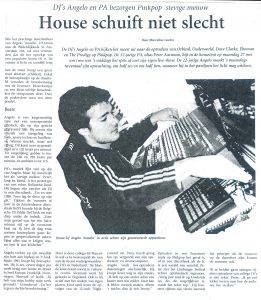 My first official interview with a DJ. Wanna know who? 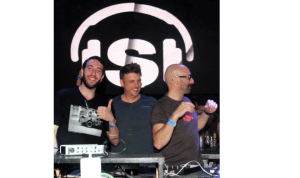 Rafa Barrios (ESP): “It felt like a crossfit class” 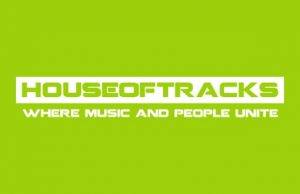